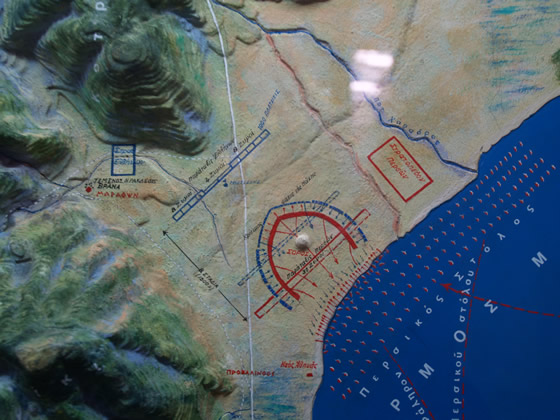 Six years earlier, Schliemann found obsidian arrowheads on the surface, which led him to assume that the mound was even older, perhaps used by Ethiopian archers, though no graves of these slaves were found.

The mound where the 192 Athenians were buried, is sign-posted as The Marathon Tomb or Tymfos Marathona and is 10meters high and around 180meters around.

Its top commands a view of the battlefield. A marble bas relief sits at its foot.

Though Pausanius wrote of 'tombstones with the names of the fallen arranged according to tribes', which had been set over the Soros, they have disappeared.

Pausanius wrote that the Persian dead were simply thrown in an open trench.

The Soros of the Plataians, which was excavated in 1969-70, is nearby, though there is uncertainty about its identification This mound, unlike the other, which is merely earth, was constructed entirely of stones, and contains two circles of pit graves, with skeletons of mostly young men found.

The pottery in the grave is contemporary with that of the Athenian Soros. Finds from the site are housed in a 5-room museum in the town of Marathon, as well as commemorative trophies of the victory. (open Tues-Sun 8:30am-3pm; 3euros admission)

The battle established the fact that the long-feared Persians were in fact vulnerable. There are many legends associated with the Greek victory at Marathon. Some of the best known described the ghostly assistance of both Theseus and Pan. Battle sounds have been reported on the otherwise quiet plain at night.

The battle plan here below, I snapped at the Athens War Museum, near the Hilton Hotel. The War Museum is free and since no one ever goes there (because war is un hip) the museum is undervalued. If you like to see really interesting weapons and armour Its killer for that. There is ancient stuff too that you wont see anywhere else like pre-cycladic obsidian hatchets and blades.